The English say that one should never discuss religion or politics. My trainer on the TEFL course I took over 15 years ago said more or less the same thing and told us to stick to ‘safe’ topics with our learners: clothes, sports, houses, cooking etc. 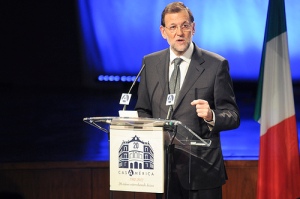 Well, the other day, I had a great class with a pair of Spanish sisters and we talked about..you guessed it…politics (aaarrrggghhhh!!!)

Step 1: After a brief discussion about work and jobs, I asked them if they were interested in learning about typical interviews questions and answers in English. They agreed and I elicited a series of questions from them. As I had expected, the questions they produced were standard interview questions, although I told them that interviewers shouldn’t ask any direct questions about marital status! Of course, their questions needed some grammatical, lexical, and syntactical fine-tuning but we drew up a list of 15 questions in about 10 minutes.

Step 2: I told them that they were going to perform a role-play / simulation based around the questions they had produced: one of them was to be the interviewer and the other the interviewee and then they would switch roles. One of them asked me what the position was. Their eyes lit up when I told them that Prime Minister Rajoy had resigned and the state was interviewing candidates for the presidential position.

Step 3: After giving them a few minutes to prepare, I let them get on with the interview. It just flowed….. They were both extremely eloquent and impassioned and the unreality of this particular interview scenario seem to free them to produce some of the most nuanced and expressive language I have heard them use. I made notes (errors and examples of good language) sat back and enjoyed the show.

Step 4: I praised their efforts and then had a quick feedback session in which I showed them the mistakes they had made and asked them to correct. When they couldn’t correct, I told them a better way to express their ideas.

Step 5: I asked them to write a speech entitled “If I were the Prime Minister of Spain, what would I do”. I asked them if they could record it and send me their speech as an MP3 recording. I’m still waiting for them!

They thanked me for the lesson and I left the room laughing and joking with them about some of the comments they had made. The lesson required zero preparation, no resources apart from a sheet of paper and a pen, and they even learned a number of new phrases.

So, thanks Mr Rajoy – I bet he doesn’t hear that word very often these days!

I'm a teacher trainer doing lots of different things in Granada, Spain and back in the UK. I've been a Course Director on Trinity TESOL programmes, worked as an EAP tutor at universities in the UK, spent a couple of years as a DoS at a wonderful school in London, and have also dabbled in online teaching, course creation, blogging and materials development. View All Posts

This site uses Akismet to reduce spam. Learn how your comment data is processed.

Take your TEFL Course in Granada